What a Selfless Son! Man Carried His Parents in Baskets for a Week to Escape Burma's Death Squad

They have often been called the most persecuted minority in the world. The 1.1 million Rohingya Muslims squeezed precariously into the north-west state of Rakhine, in mainly Buddhist Burma, bordering majority Muslim Bangladesh, are stateless and unwanted. 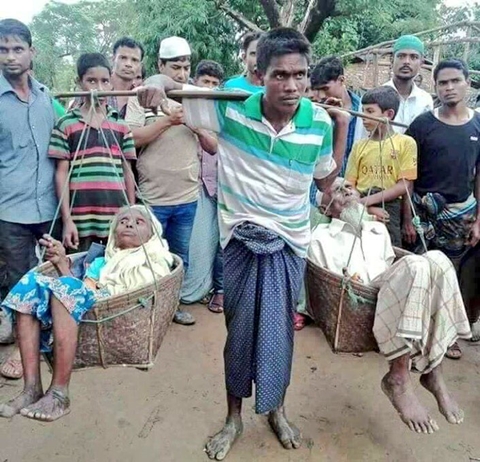 Just inside Myanmar, where Islam and Buddhism collide, thousands of desperate Muslim families are on the move. About 300,000 Rohingya civilians have fled to Bangladesh since late August. Many people have died trying to get out.

The inhumane treatment of the Rohingyas has tarnished the image of Myanmar’s civilian leader and Nobel peace prize laureate Aung San Suu Kyi, once a famously unflinching defender of human rights and darling of the West.

She now faces international fury, particularly from Muslim nations, for failing to stand up to armed forces chief General Min Aung Hlaing, whose soldiers are accused of rape, murder, arson, and of ripping Rohingya babies from their mothers’ arms and throwing them into rivers and fire.

Ms Suu Kyi has publicly stuck to the military’s line that the Rohingya are illegally squatting on the Burmese territory, leaving fellow Nobel winner, Malala Yousafzai, aghast and urging her to speak out against the tragedy.

The latest military crackdown, which began on August 25, caused almost 90,000 Rohingyas to flee under fire to squalid, overflowing relief camps across the Bangladeshi border in just two weeks.

Officially close to 400 people had died by early September, but human rights activists claim to have confirmation of at least 1,000 deaths and believe the figure is much higher.

Controversy is up in the air following the appointment of Dutchman, Danny Makkelie, to officiate Saturday’s Champions League quarterfinal match between Manchester City and Olympique

A political ally of Asiwaju Bola Tinubu, national leader of the All Progressives Congress (APC), Chief Lanre Rasaq, is dead. He died on Saturday morning

Nigeria international, Joe Aribo has been hailed by Rangers supporters as the club’s driving force following the midfielder’s wonderful performance against St. Johnstone. Aribo netted his