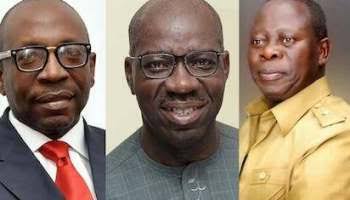 Governor Godwin Obaseki of Edo State has continued the uprooting of former national chairman of the All Progressives Congress (APC), Adams Oshiomhole, APC governorship candidate, Pastor Osagie Ize-Iyamu, from the grassroots of Edo political space. The Governor, candidate of the PDP in the September 19 governorship election in the state, on Thursday further pulled down the APC in Owan East Local Government Area during the party’s campaign for his re-election.

Governor Obaseki has been deepening his support mobilization into the hinterlands of Edo State contrary to earlier perception of Ize-Iyamu that the Edo governor is elitist and does not relate with the grassroots. The Edo Governor has been penetrating the various local governments and wards in the state with ease, expanding his support base.

Governor Obaseki harvested legions of supporters who decamped from the APC to the PDP at the campaign rally in Owan West on Thursday.  National Daily gathered that over 3,000 dumped the APC for the PDP in Owan East. The people have inclined to populist indoctrination of “wherever you go, we will go”; this was said to have become the slogan of loyalty, solidarity and support for governor as PDP sustains ward to ward campaign in the state. The Owan East local government area was not left out of the emerging political phenomenon in Edo State.

Governor promised he will not disappoint the people, assuring them that he will reciprocate their support after his re-election.