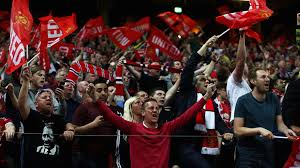 Manchester United have been in the hunt to for efficient forward to further fortify their attack.

The Old Trafford club who have strongly linked with the transfer of Jadon Sancho are reported to be considering a move for Barcelona sensation Ousmane Dembele if their efforts to land the England international fall through.

It is understood that the France international has emerged as a transfer target for United, as they struggle to complete a deal for top target Jadon Sancho.

National Daily recently reported that United have missed Dortmund’s August 10 deadline to make an acceptable offer for £108million-rated Sancho, and were told by club chief Michael Zorc that a transfer is now off the table.

Meanwhile, the Red Devils are expected to remain in pursuit of the England international, who is currently training with his Dortmund team-mates in Switzerland ahead of the new Bundesliga season.

But United are also looking at alternatives, with the former Borussia Dortmund forward believed to be in the mix.

The France international who completed a record £135m move from Dortmund to Barcelona in 2017 as a replacement for Neymar, is said to have been struggling for form in his three years in Spain.

Sequel to the above, the forward has been regularly linked with a move away, and according to reports from Spain in August this year, Dembele made contact with Martial.

However, the discussion of the compatriots was not made public, but Dembele is believed to have asked Martial about life at Old Trafford ahead of a possible move.

With Barcelona boasting the biggest wage bill of any team in the world, they would be keen to reduce their wage bill this summer and could be prepared for Dembele’s exit with the right price.