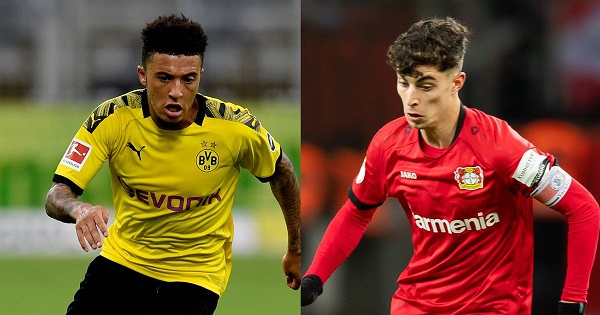 It has been speculated that two of the best young football sensations in the Bundesliga have been tipped to swap their league for the English Premiership next season.

While Chelsea are eager to secure the services of Kai Havertz from Bayer Leverkusen, their Premier League rivals in Manchester United have not hidden their long time desire to bring Jadon Sancho from Borussia Dortmund to Old Trafford.

Meanwhile, with the latter’s failure to secure Sancho before the expiration of Dortmund’s August 10, 2020 self-set deadline, it has been speculated that the Old Trafford club could reportedly hijack Chelsea’s transfer bid to sign Kai Havertz if their further attempts cannot get a deal done for the England international.

The Bundesliga giant said on Monday that Sancho would be staying in Germany with the Red Devils having so far failed to meet their asking price of £108million.

Though United who made Sancho their top target for this transfer window have not given up hope of signing him, but National Daily can confirm from the report by Manchester Evening News that if they continue to be frustrated they could turn instead to Havertz.

Havertz has been widely expected to join the Stamford Bridge club this summer, but the fact that the Germany international had been linked with interest from the Red Devils previously could change the entire narratives and this will definitely set the path for a transfer bidding war.

Meanwhile, it appears that Havertz transfer may be smoother going by the fact that he has made his intention clear on leaving for a new challenge.

Again, Leverkusen sporting director Rudi Voller said earlier this month that Havertz would not be going anywhere until after the conclusion of the club’s Europa League campaign which has now ended with their elimination by Inter Milan on Monday night’s quarter-final.

It could be assumed that, United could use the £80m they are prepared to splash on Sancho to start the negotiations for Havertz to Chelsea disapproval perhaps.