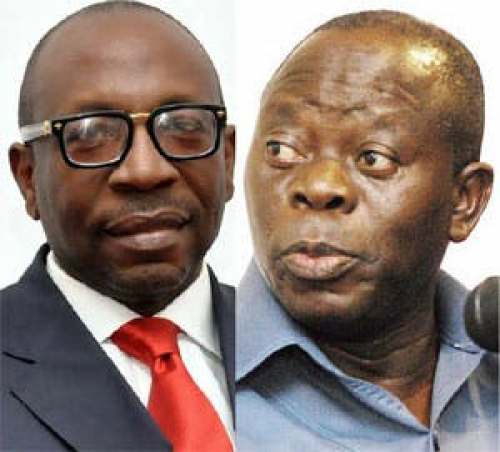 The ousted national chairman of the All Progressives Congress (APC), Adams Oshiomhole, may be facing fresh trouble over his status as a member of APC after his suspension from the party by the APC ward in Etsako Local Government Area, Edo State, which metamorphosed into his removal as APC national chairman. The fresh trouble may not be unconnected with the uprising of some civil society groups questioning the APC membership status of Oshiomhole vis-à-vis his unguarded utterances capable of inciting political violence in Edo State under the guise of electioneering campaign for the APC governorship candidate, Pastor Osagie Ize-Iyamu.

National Daily gathered that the civil society groups had in a petition to President Muhammadu Buhari protested that Oshiomhole is not a member of the APC. The groups at a press conference in Benin City, on Tuesday, therefore, questioned his status in playing prominent role in the APC electioneering campaign in Edo State.
National Daily learned that a coalition of Civil Society Organisations (CSOs) petitioned President Muhammadu Buhari to caution Oshiomhole, who they protested  is constituting a present and potential danger to the peace and security of Edo State with his unguarded and incisive statements under the pretense of campaign for Ize-Iyamu, APC governorship candidate, in the September 19 elections.
Leaders of the amalgam of CSOs, in a statement in Benin City, on Tuesday, by the President of Afenmi Peace Initiative, Comrade David Lawani; President, Edo Youths United for Justice and Democracy (EYFD); and Barrister Felix Affiah for Niger Delta Professionals Alliance, demanded President Buhari to call Oshiomhole to order. They noted that the ousted APC national chairman did not appeal the judgment of the court of Appeal which upheld his suspension as a member and national chairman of the APC to redeem his party membership.

“We demand President Muhammadu Buhari to call Adams Oshiomhole and his surrogate candidate to order. Oshiomhole refused and failed to appeal the judgement of the Court of Appeal in Abuja, which confirmed his suspension as a member of the APC.

“If Oshiomhole’s suspension as a member of APC has been approved by the Nigeria Judiciary, in what capacity is he now acting on behalf of the APC?

“Oshiomhole is now a clear and present danger to peace and security in Edo State,” the CSOs declared.

The CSOs berated Oshiomhole over the serial violence in Edo State since 2019 against the incumbent Governor and the government of Edo State, including attacks at his residence in Iyamho and the attack of the Peoples Democratic Party (PDP) governors at the palace of the Oba of Benin. The CSOs declared: “For us in this coalition, these acts of sponsored political violence are totally unacceptable. We already have a deadly pandemic that has taken the lives of thousands of Nigerians. As such, we will not allow this new virus of political violence to snatch the lives of innocent Nigerian citizens living in Edo State.”

Furthermore, Adaze Emwanta, representing the Midwest Progressives Forum (MPF), expressed dismay over the activities of the ousted APC national chairman, protesting that Oshiomhole is not a member of any political party at the moment, arguing that he should n]desist from insulting the sensibilities of Edo people by threatening violence and mayhem like a crybaby after he has fallen from glory.

Some stakeholders in Edo State who spoke to National Daily were of the view that the rise of the CSOs on the membership status of Oshiomhole in the APC could have a multiplier effect on the APC candidate being sponsored by Oshiomhole on the APC platform. They added that the ensuing crisis may create uncertainty for Ize-Iyamu; and could make the APC candidate tremble in the build up to the September 19 election.