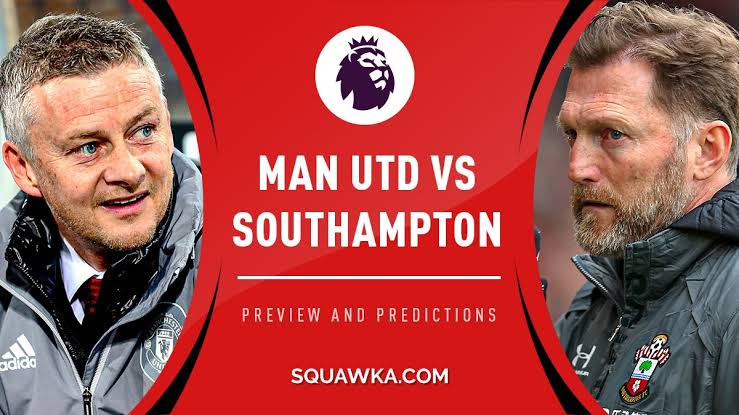 Three of the last four Premier League matches between these two sides have finished level, but United won their last meeting at Old Trafford last March, recording a 3-2 victory.

Southampton are certainly capable of causing a surprise on Monday night, but we fancy Solskjaer’s side to further boost their top-four hopes with a two-goal success.

Manchester United will be looking to make it five Premier League wins in a row when they welcome Southampton to Old Trafford on Monday night.

The Red Devils have been in excellent form since the league’s restart last month and currently sit fifth in the table, while Southampton occupy 12th, having also impressed since returning to the field.

Now unbeaten in their last 17 matches in all competitions, United will be looking to further boost their chances of claiming a top-four finish when they welcome Southampton to Old Trafford on Monday night.

Fifth could yet be enough to secure Champions League football next season depending on the outcome of Manchester City’s appeal over a two-year suspension, while the Red Devils could also qualify for next season’s premier European competition by winning the Europa League.

There is no question that Ole Gunnar Solskjaer’s side will have their eyes on a top-four finish, though, and they are currently fifth in the table, just a point off fourth-placed Leicester City.

Chelsea are just two points clear in third, although the Blues will have the chance to stretch their advantage when they travel to seventh-placed Sheffield United on Saturday night.

United were held by Tottenham Hotspur on their return to the field on June 19, but they have won their four Premier League games since, overcoming Sheffield United, Brighton & Hove Albion, Bournemouth and Aston Villa, winning by a three-goal margin on each occasion.

The 20-time English champions will take on Crystal Palace, West Ham United and Leicester City in their final three league games of the season, while they also have an FA Cup semi-final against Chelsea on July 19 and will resume their Europa League campaign at the start of next month.

Southampton, meanwhile, have also been in impressive form since the lockdown period, winning three and drawing one of their five matches since June 19.

The Saints have had their problems this season but a 1-0 win over Manchester City on July 5 was an indication of their improvement, while they also picked up a good point away to Everton on Thursday night.

A total of 44 points from 34 matches has left Ralph Hasenhuttl’s side in 12th position in the table and finishing in and around their current spot would certainly go down as a success.

Indeed, Southampton, who will take on Brighton & Hove Albion, Bournemouth and Sheffield United in their final three matches, have finished 17th and 16th in their last two Premier League seasons.

United will the be the favourites to continue their excellent form, but the Saints actually have the fifth-best away record in the Premier League this term, picking up 27 points from their 17 matches, with only Liverpool, Chelsea and Man City gathering more points on their travels during the 2019-20 campaign.

Solskjaer has named an unchanged side in each of the team’s last four Premier League matches, and it would not be a surprise to see the same XI sent onto the field once again.

Defensive duo Axel Tuanzebe and Phil Jones remain on the sidelines, but United otherwise have a fully-fit squad.

Mason Greenwood’s stunning form has seen the 18-year-old cement a spot in the front three alongside Marcus Rashford and Anthony Martial, while Nemanja Matic has been in excellent form in the middle of the park.

Scott McTominay and Fred could come into Solskjaer’s thinking when it comes to potential change, but the United manager has suggested that he will not alter a winning side.

Victor Lindelof was a slight doubt against Villa last time out due to a back injury, but the Swede overcame the issue to start at Villa Park and is likely to keep his spot alongside Harry Maguire.

As for Southampton, Sofiane Boufal, Yan Valery, Nathan Tella and Moussa Djenepo remain on the sidelines through injury, while Jannik Vestergaard is also unlikely to be fit as he battles a muscular problem.

Pierre-Emile Hojbjerg returned from injury against Everton and could be chosen ahead of Oriol Romeu in the middle of the park, while Shane Long could replace Che Adams to start alongside Danny Ings.

Nathan Redmond and Stuart Armstrong should keep their spots in the wide positions, though, with James Ward-Prowse again captaining the side from the middle of the park.