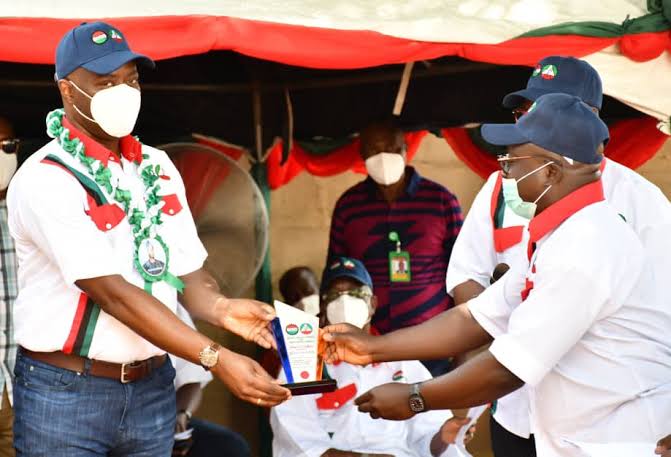 Oyo State Development Advocacy Group (OSDAG), has commended Governor Seyi Makinde, for leading the park on implementation of the new national minimum wage in Nigeria, since it was signed into law.

The group in a statement signed by the spokesman, Mr. Micheal Ogunsina said the government of Oyo State, led by Engineer Seyi Makinde has added another feather to his numerous achievements within a year he took the reins of power as the State governor.

Citing  full implementation of new minimum wage of N30,000, which was as a result of the National Minimum Wage Act, signed into law on April 18, 2019 by President Muhammadu Buhari.

There were agitations by Nigerian workers, through the organized labour, who demanded a rise in their wages, and the State governors and the Federal government finally agreed on the payment of N30,000 to all the workers across the country, which Makinde has been up to date with.

According to an extensive report (https://nationalrecord.com.ng/new-national-minimum-wage-implementation-the-endless-vigil/), done by the  National Record, which detailed the implementation of the new minimum wage in all the States of the federation, it indicated that though in most states, the new national minimum wage may have been technically implemented; however, in virtually all the states, implementation, where obtainable, is haphazard and restricted to state’s core civil servants.

The report stated that, “While it took organised Labour and the federal government exactly six months to agree on the consequential adjustment for federal public workers on October 18, 2019, after a highly belligerent negotiation process; in many states where the governors are effectively in absolute command and control of every process, the consummation of the new minimum wage has remained unimplemented and in limbo due to several roadblocks mounted by the governors”.

The National Record reported the implementation in Oyo State as follows, “Oyo: Implemented and up-to-date”

“Oyo State commenced implementation with effect from January, said Comrade Sikiru Bayo Titilola-Sodo, the Oyo State chairman of NLC, who stated with emphasis that workers are not owed any arrears. “Salaries and all arrears have been paid; that is what I meant by no arrears, and they have been paid up to date; we are up to date, June salaries were paid on the 26th of last month [June 2020],” Comrade Titilola-Sodo said.”

“He however admitted that there are other issues related to unpaid allowances and gratuities. He said gratuities are not being paid in some sectors for 8 years.

“This government has just started paying, the government is paying 2013 now; every month for civil service retirees, and quarterly for the primary school and local government retirees,” said Comrade Titilola-Sodo”.

OSDAG said, their own core mandate includes continued  track up of the achievements of the government, with a bid to point out where there is need for more efforts to better the lots of the masses.

“Given the fact that the new minimum wage was fully implemented, without a fail in the payment of civil servant salary, since the government came to office on May 29, 2019,  the governor needs to be commended for being on the side of the people of the State.

While charging other State governors to work on all the grey areas and existing impediments to the implementation of minimum wage in their State.

“The main reason, the  mandates were given to them by the people, is for the purpose of making life better for them.” Group affirms.