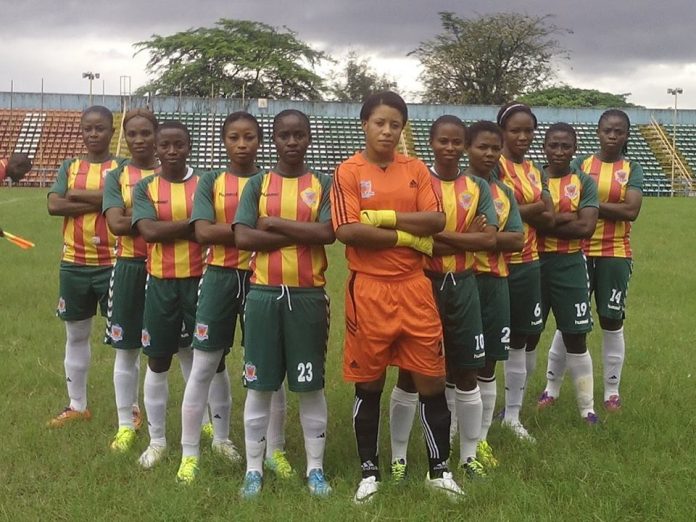 It is no longer news that the Cross River State Government under the leadership of Governor Ben Ayade has been owing the only team representing the state in top division football league across the men and women football Pelican Queens Football Club of Calabar.

Pelican Queens, the women state owned football ream has been owed salaries and matches bonuses by the Cross River State Government for up to 10 months (June 2019 to March 2020).

The twist to this sad incident is that the players of the club have been going on protest to the Governor since 3rd quarter of last year 2019 to January 2020 up till now.

Yesterday the players embarked on a third missionary journey peaceful protest with placards in 2020 to the Cross River State Government House after a failed attempted two days ago with the target of expressing their grievances against the Governor of the State on the underlying issue.

The girls trooped in solidarity to the Governor’s Office (Cross River State Government House) this morning to sit outside the gates of the premises as usual but were alerted after staying for about an hour that the Governor’s official convoy was passing by.

The girls chased the Governor’s convoy on foot like a pure water seller trying to collect his change from a passenger in a  fast moving transit bus but all in vain.

A glimpse of hope for the girls with a tip off that the Governor was heading to his residence, the ladies marched onward like an army of ants for a follow up missionary journey.

On getting to the residence of the Governor on foot, a senior official to the Governor, Mr. Ben Akpabio was remorse with the sight of the weary girls and had to address them with the same lame punch lines of words used in this clime of Nigeria, he said, “Your matter will be addressed by the Governor, give us time”.

Onward forward was the mindset of the resilient girls who safely got to the residence of Governor Ayade and sat down at the entrance.

After minutes of no response by the occupants of the premises, a uniformed officer came out to address the girls who were ready for whatever will be thrown at them.

The wailing of the players to the uniformed man was that the captain of the team, Hodo Williams was hospitalized some days ago due to depression and stomach Ulcer coupled with no food to eat by the players.

Dear readers, do you know that the men football team, Calabar Rovers that plays in the second tier of Club football in Nigeria, the Nigerian  National League (NNL) have been paid all their outstanding salaries and bonuses till February 2020 except for the month of March which is outstanding.

Now where was I? Back to where I diverted from…

The uniformed man of whom  the girls suspected was the Chief Security officer of Governor Ayade reiterated that the Governor will not attend to them but that the matter will be looked into and that after two weeks the  team will be paid.

The girls insisted that they will not go anywhere until when they see the Governor in person.

The uniformed man had to pacify the girls by giving him his personal phone number and assured them that the Governor will do the needful.

He also warned the girls that they will all get arrested if they do not leave immediately because they are trespassing on the private residence of the Governor.