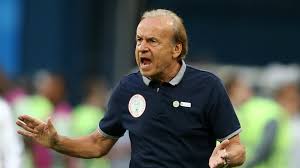 Green explained that Rohr has failed in his duties and should be shown an exit door because he has done nothing new all along and he has not surpassed the achievement of the previous home-based coaches who have managed the Eagles team.

“What we gave Rohr and what we got in return is a poor showing at the world cup and a third-place at the nation’s cup which I think we did not deserve.

“We should have at least gotten to the Quarterfinals at the world cup to show that he is an expert, an expatriate who is better and bigger than anyone found in Nigeria, Green said this during told brila.FM show,National Daily monitored.

Green also lamented against the number of years it takes to build the national team.

“How many years will it take you to build? Do you have to build the team every time for a single tournament?

“With all due respect, he is an average coach, he is as good as any home-based coach and so, why don’t we look inward if we want the kind of result Gernot Rohr has given us in this country?

“We can look inward and give that person the coaching role, and of course, I do tell people if you want to get these Nigeria coaches to handle the national team, you will not pay them the kind of money you are paying Rohr,

“We have Finidi George and Emmanuel Amunike these are people I know they can help our football to grow”.